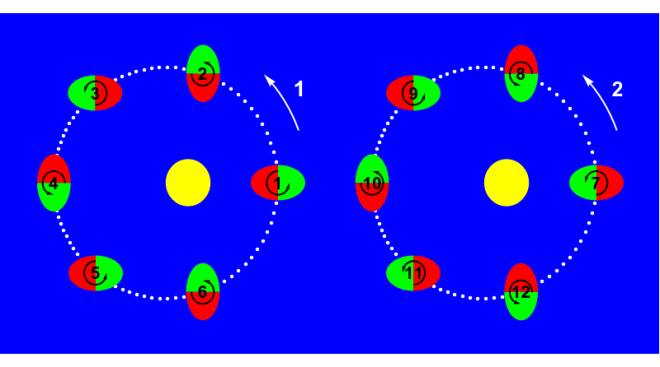 In 2018 the space mission Bepi-Colombo will start its long-term journey to visit our innermost planet. It is Europe’s first mission to Mercury. The mission objectives include the investigation of the origin and evolution of planets very close to their parent star. I am interested in the orbital and rotational evolution of this planet. My article on the steady state obliquity of a rigid body has been published in CM&DA. In this work I investigated the influence of the gravitational field on the axial tilt and coupling between the rotation and orbit of planet Mercury. The axial tilt, or obliquity, of Mercury is close to but not exactly zero, and the orbital period of Mercury is about 88 days while the rotation period is very close to 2/3 of this value. Mercury therefore is currently situated in a 3:2 spin-orbit resonance with non-zero obliquity. The magnitude and stability of the axial tilt is determined by the kind of spin-orbit resonance and the gravitational field, i.e. the internal mass distributions of the planet. Mercury, very probably, was not always situated in the 3:2 spin-orbit resonance. Formation studies of the planets assume that planets form at much higher rotation rates. Over time dissipative effects like tidal friction slows down the rotation period to allow the coupling between the orbit and the rotation of the planet. In my study I investigate the influence of different spin-orbit resonances and an extended gravitational field on the magnitude of the axial tilt. I derive simple formulas that allow to predict this steady state obliquity for given spin-orbit resonance and gravitational field parameters. I also derive a simple mathematical model that allows to investigate the oscillations of Mercury around exact spin-orbit resonance. The amplitude and periods of these oscillations are the result of other physical effects, i.e. the internal composition of Mercury.