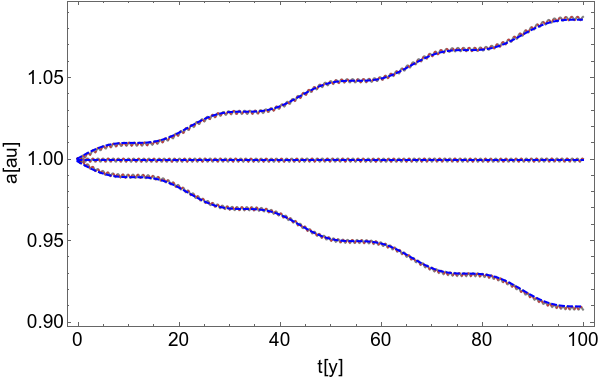 Micro-meter sized dust grains in the heliosphere are not only subject to the gravitational attraction due to the other celestial bodies like the sun or the planets, but also experience a force due to solar radiation, and the inter-planetary magnetic field. While the interaction with photons and the solar wind may cause the grains to spiral towards the sun, the interplanetary magnetic field may counteract this kind of motions. In my study on the dynamics of charged dust grains in the heliosphere I derived a simple theoretical condition on the charge-to-mass ratio for which the distance from the central star becomes stabilized. The relation is used to demonstrate that the orbital life-time of dust grains in the solar system may drastically be prolonged in presence of normal components of the interplanetary magnetic field.

The figure shows the evolution in time of the distance of the dust grain from the sun in astronomical units for three different values of the charge-to-mass ratio: for uncharged grains the distance decreases with time and the grain will eventually fall back into the Sun; for charged particles, with arbitrary charge large enough the grain’s distance from the Sun increases with time. Only, if the charge-to-mass ratio fulfils certain criteria explained in full detail in (1) then the semi-major axis of the dust grains remains at its initial value over the full time period.